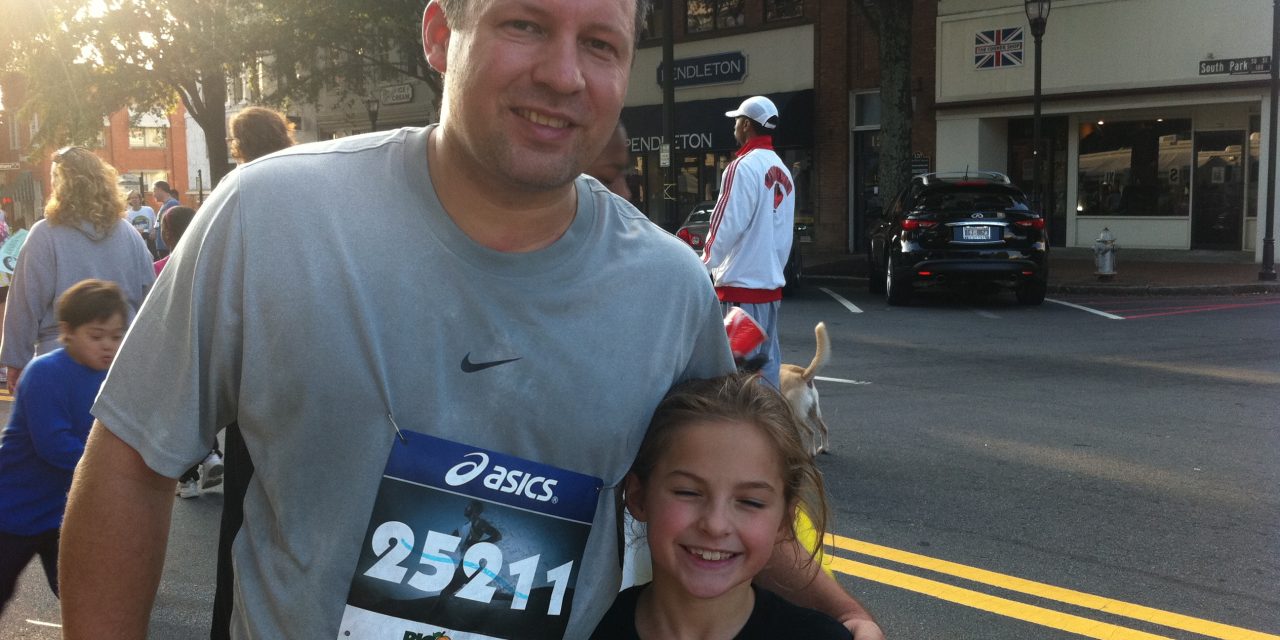 Autumn before I was to turn 40. Anna was in the 3rd grade and in a running program for girls, which included a requirement to run a 5k race or two during the year.

Introspective. Was I doing what I needed to do for my family? Was I fulfilled by my current employment? Was I making enough money? Was I reaching my potential? Was I doing the right things? Was I a good enough husband and father?

Anna asked me to run a 5k race with her. While I had run many 5k’s in high school, I hadn’t run one since, but Holly really doesn’t like to run in the cold weather. I told Anna I’d do it.

Not even sure I could still do it, I got out in the neighborhood a couple times the week before the race and was convinced I could still run the race.

Wanted to challenge Anna. Told her that if we didn’t start out too fast, and if we worked really hard, we could finish the race without stopping, and that would be our goal. She had run with the girls, but they’d never run 5k at once. She wasn’t convinced but was willing to try.

When the race began, Anna started off a bit fast. She was concerned that other people, including some of the girls she knew, were passing us and moving ahead.

I explained to her that our goal was to keep a constant, steady pace so we could finish strong. Even though it would be hard, and there would be times we’d want to stop, I knew we could do it.

We came to some hills a little over mid-way through the race, and Anna wanted to stop and walk. I told her she could push through. I knew it hurt, and if she absolutely needed to, we could stop, but I knew she could do this. I reached out my hand and helped pull her along for a while. We repeated this pattern a couple times during the latter part of the race until we rounded the corner and the finish line was in sight.

At that point, Anna knew she could do it. She felt and knew that somehow she still had strength left to finish strong and fast. As we began our final sprint for the finish line, I don’t remember which of us reached for the other, but we sprinted the last couple hundred yards hand-in-hand, both of us elated at having completed this difficult task together.

Anna had learned she had strength and abilities she never knew she had. And at some point during that final sprint, I had a spiritual epiphany of my own. I was exactly where I was supposed to be and doing exactly what I was supposed to do. I realized that what I do professionally and how much money I make aren’t the important things at all. What matters is being there for my children and those who might benefit from something I have to offer, spending time with them and helping them discover their potential, that they have it in them to do difficult and amazing things.

It was a spiritual experience for me. For a moment, I knew I was on the path He had prepared for me. I knew how proud our Heavenly Father is of us when we show courage and give our best effort in accomplishing things we didn’t know we could do but were willing to try. I knew that he was as proud of me as I was of my daughter for my efforts to do right. And I knew that the feeling I felt, reaffirming to me what is most important, came from Him.

Moroccan Proverb – If a man leaves children behind him

Medley of Primary Songs by The Bonner Family